The beautiful back panel of an iPhone 4/4S. The size of an iPhone 5/5S and its angular, aluminium design. Apple Inc. currently offers inovations, which progressively influence the technological world. For example, the Force Touch feature, recently introduced with the newest iPhone 6S, is still fresh in our minds. It will soon become the standard for all smartphones in the world. The future of smartphones may also be a touchscreen which extends across the entirety of the glass covered front display. Thanks to the cooperative effort of Svetapple.sk and skilled designer from deepmind.sk, we can see this future in action now!

It would be cool to have a FullScreen touchscreen on the iPhone. Nowadays we are used to touchscreens that have the classic rectangular or square shape. No smartphone offers what is shown in this very interesting concept by Miloš Belanec of Deepmind. He used the shape and dimensions of old iPhone 5/5S model combined with the design of a 4/4S, which had a similar glass back panel as we can see on the concept renders.

The angular shape of the iPhone seems quite popular, but Apple is likely to introduce a rounder model with the iPhone 7, and that’s perfectly fine. Although, as is proven by the concept render, the combination of glass, aluminium and an overall angular shape could also be a very welcome design choice. That is not the most important feature of this design, however.

That would be FullScreen mode, which would work in a very special way. The entire front panel of the iPhone 7 could theoretically be turned into a touchscreen. Turning the phone on, it would be just as iPhones are today – the typical rectangular touchscreen would be used for commonplace tasks. But if you were to start playing a game, browsing photos or watching videos, a special function could be turned on, which would would enlarge the touchscreen to cover the entire front display. 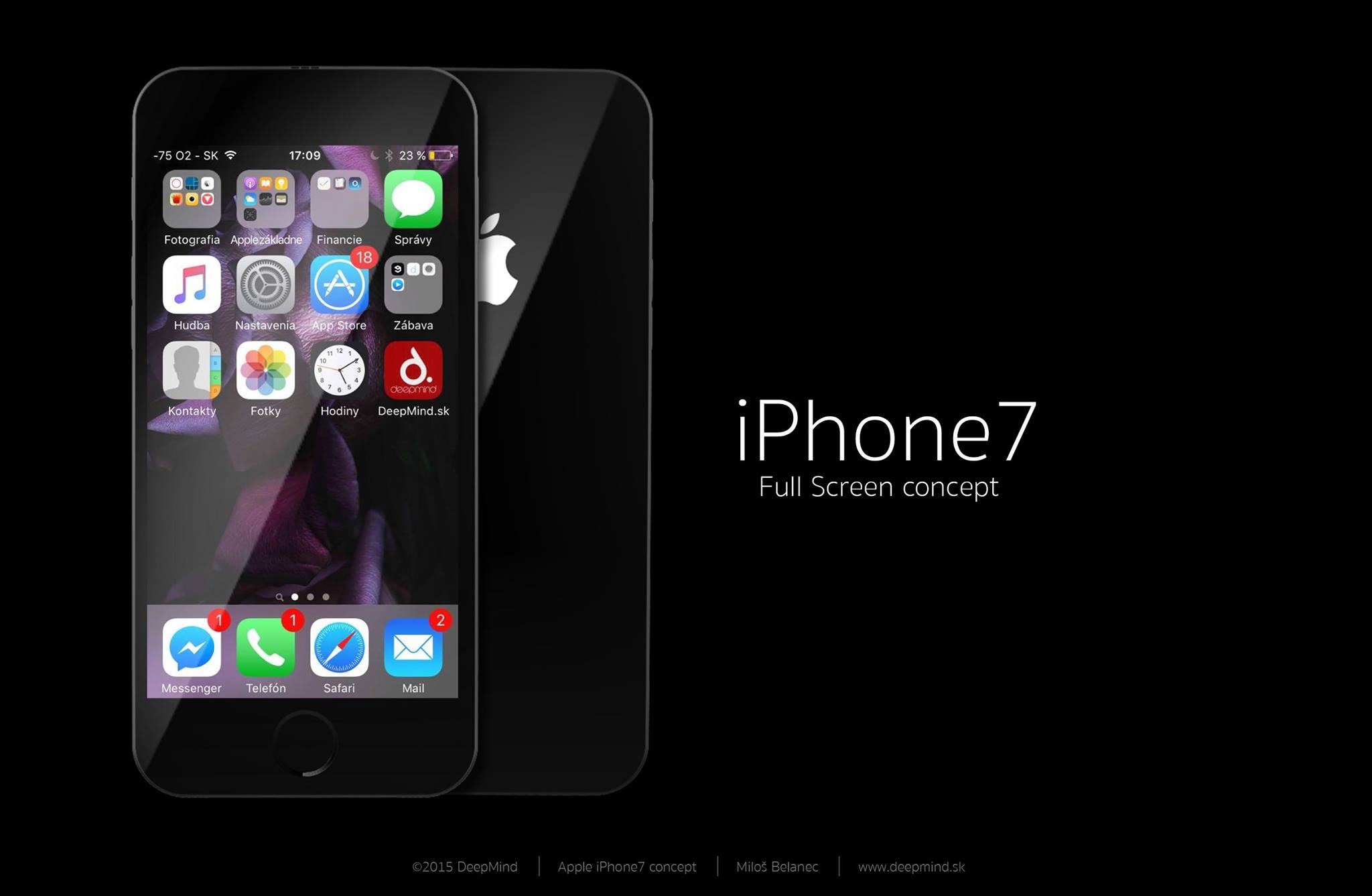 An interesting feature seen on the concept is also the use of the Touch ID as part of the touchscreen. The home button has become an inseparable element of all iPhone devices, which is why it should definitely be preserved in future releases. Don’t expect it to be the same as it is now, though! Apple could make it a part of the touchscreen using Force Touch technology, which would allow it to recognize whether you’re trying to access the home screen or not.

The TapTic Engine would take care of haptic feedback, as it could simulate touch, just like on the twelve inch MacBook TrackPad.

Without a front camera

Perhaps you noticed that this iPhone is missing a front camera, which is  now commonly used to take selfies, which are one of the greatest phenomenons of our time. Sadly, this is the price to pay for the unique display. Although not impossible to implement into the front panel, a front camera would‘ve disrupted the design, which is why it had to be removed.

You can watch a video of the concept below. It’s already made its way round the whole world on multitudes of websites. But that’s not all, as more views will likely come.

What do you think about this concept? Let us know in the comments below!